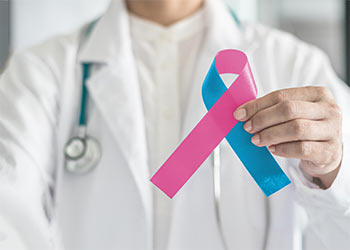 “Cancer doesn’t discriminate.” Yet, when it comes to breast cancer, the disease is often associated with females.

Male breast cancer is rare, but it can occur. Less than 1% of all breast cancer cases develop in men, and only 1 in 1,000 men will be diagnosed with breast cancer in their lifetime. A male’s chance of getting the disease increases with age, typically developing between the ages of 60 and 70.

The American Cancer Society estimates that in 2019, 2,670 men will be diagnosed with invasive breast cancer in the United States. Since June is Men’s Health Month, we are helping to raise awareness about male breast cancer and the importance of early detection.

What are the risk factors for male breast cancer?

It is unknown how the cells in the breast become cancerous. However, there are numerous risk factors for male breast cancer that have been identified.

How is male breast cancer diagnosed?

Most male breast cancers are diagnosed when a man discovers a lump on his chest. However, breast cancer in men is often diagnosed at a later stage than female breast cancer. Even when a lump is discovered, men are less likely to be concerned and often avoid seeking medical attention until they experience more severe symptoms. The smaller amount of breast tissue present in men can also make it more difficult to catch cancer at any early stage.

In some cases, a breast lump can be caused by a benign condition, known as gynecomastia. In fact, this cause of a breast lump is much more frequent. The lump in male breast cancer is usually a painless, hard and fixed nodule in the subareolar region; the lump in gynecomastia is usually rubbery, smooth, and movable. Other symptoms of male breast cancer can include nipple inversion, pain, bleeding, and /or skin ulceration.

The same techniques used to diagnose breast cancer in women are used in men:

The treatment options for male breast cancer include:

What are the results of male breast cancer treatment?

As in female breast cancer, the results of therapy are dependent on stage at diagnosis and the biology of the tumor. In general, results are similar between males and females when comparing treatment by stage of disease.

Early detection is still the mainstay of success. The estimated 5-year survival rate for early stage male breast cancer is almost 100%. Men’s Health Month is the perfect time to schedule your routine doctor check-ups and to educate yourself and others about male breast cancer.

Authored by James H Frost, MD. Dr. James Frost is a board certified, general surgeon, located in Union, NJ. Dr. Frost has been named a Top Doctor in New York Magazine, Castle Connolly and Inside New Jersey Magazine and specializes in treating patients with benign and malignant breast disease.

We are pleased to offer virtual appointments for our patients to continue to receive expert care, from the comfort of your home.

Schedule Your Appointment Today
Important Announcement for our patients

The health and safety of our patients, their families and staff remain our top priority as the situation surrounding the COVID-19 continues to evolve.  With guidance from the NJ Department of Health (NJDOH) and Centers for Disease Control and Prevention (CDC), we are taking all necessary precautions and monitoring all alert levels.

Due to the current situations we have amended our practice operations and policies outlined below until further notice.

If you have any questions or concerns regarding your upcoming appointment please contact our office at 1.844.973.0002

We sincerely apologize for the inconvenience and appreciate your continued cooperation as we work together to keep everyone healthy and safe.